Home » The Future of Wheat is Now

The Future of Wheat is Now 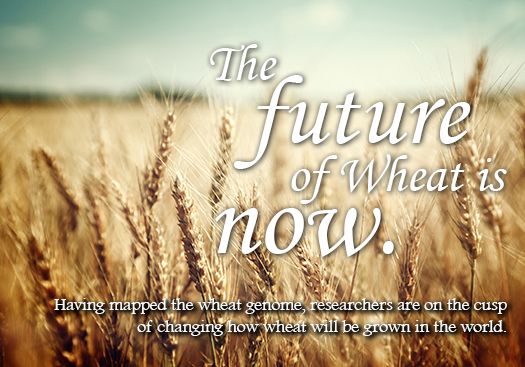 The world is projected to have significant food shortages in the years ahead. Does the Genome Prairie-supported 4DWheat project hold one of the keys to feeding humanity?

In plant genomics, fewer puzzles have been more difficult to solve than that of wheat.

In recent months, many consumers have experienced shortened food supplies and rising costs at their local supermarkets. The present-day challenges reflect a confluence of factors, ranging from conflict in Europe to less-than-ideal food harvests impacted by the recent drought and other environmental factors.

The present-day challenges reflect a longer-term worry that the world’s food supply may be running short to supply the growing world human population. The scientific community is doubling its efforts to find solutions, including genomic researchers on the prairies to improve wheat production. Now, genomics researchers say, the wheat genome code has been cracked, and the doors toward developing more robust crops are opening.

Wheat comes in numerous varieties among many species, including bread wheat (also known as common wheat), the most grown globally, and durum (mainly used for pasta). There is no more consumed or essential crop than wheat as a nutritional source. A major staple in every nation in the world, in 2021, about 780 million metric tons (nearly 2 trillion pounds) of wheat was harvested globally. Canada, once the world’s largest wheat exporter (some 80 years ago), now produces more than 30 million tons each year. Perhaps no longer the greatest, but is still one of the world’s biggest exporters.

Two trillion pounds grown yearly seems more than enough to feed a planet. Still, human population growth projections would likely exceed the world’s food production capacity, at least by today’s standard. With the global population expected to surpass the 10 billion mark in the next 30 years, the consensus among many experts is at the current consumption pace, severe shortages will arrive by around 2050. To meet the demands of feeding 10 billion people, scientists have feverishly sought ways of producing 50% more wheat than it does now. It’s no easy feat considering almost no more arable land is left on earth to grow crops.

Genomics may offer the solution to the projected wheat shortage. Developing strains with greater tolerance to disease, abiotic stresses, and climate change could lead to significantly higher yields for farmers, bridging the anticipated food gap.

From a genomics perspective, developing new wheat strains first requires fully understanding the complexity of wheat itself, a grain that has challenged plant breeders since its human domestication some 10,000 years ago. Plant breeders like Dr. Curtis Pozniak from the University of Saskatchewan have toiled over figuring out wheat’s hidden secrets, methodically untangling its enormous genomic structure.

“Wheat has around 14 billion base pairs in its DNA, which means it has five times more DNA than the human genome,” said Pozniak from his office at the Crop Development Centre.

“In the early days, deciphering the wheat genome puzzle was painstaking. Think of it this way. Imagine doing a puzzle of a clear blue sky with nearly identical pieces. Where do they go? How do they fit together? Now imagine doing that with a puzzle that’s got millions of pieces. That’s wheat.”

“We want to take advantage of genomic technologies and apply them to understand the breadth of diversity in wheat. Wheat is an interesting species in that it’s evolved over the last 10,000 odd years and is actually comprised of individual subgenomes derived from wild relatives that still exist today.

“These wild relatives are a reservoir of genes for disease resistance or productivity traits or stress tolerance that we can still tap into.

“4DWheat is designed to characterize the extent of that genetic variability while developing genetic tools that can effectively tap that diversity in plant breeding,” added Pozniak. “This will ultimately help us develop new varieties that are higher yielding, more disease resistant, and adaptive to a changing climate.”

Pozniak, who grew up on a farm near the tiny town of Rama in eastern Saskatchewan, earned his Ph.D. in plant science at the U of S and has devoted his academic life to breeding new wheat varieties and researching and teaching genomics.

“I always tell my grad students this story; they’re like, ‘oh, it took me two months to sequence this variety and assemble this genome!’

“Then I remind them when I did my doctorate, it took me two years to do a single DNA analysis on one little spot on the genome.

Times, though, have changed the research scene dramatically. The combination of enhancements in genomic research techniques, aided by advances in computing and artificial intelligence, has supercharged the decoding process, said Pozniak.

“It’s a fascinating time to be a biologist and plant breeder because the resolution of which we can see and understand the genome is unprecedented.

Putting together the puzzle pieces is being driven by uncertainties about global food security over the next three decades and this year. Conflict in Europe, and drought conditions in parts of Asia, the U.S., and Canada are creating conditions for higher prices in the supermarket for basic groceries like bread and cereals. Between early February and May 2022, the cost of wheat on commodity markets increased by nearly 50%, which presents big opportunities for Canadian producers heading into the autumn harvest season.

The potential for growth from genomics research is a significant reason why the Saskatchewan Wheat Development Commission is a long-term supporter of the genomics research overseen by Pozniak. Blair Goldade, Executive Director of Sask Wheat, a funder of 4DWheat’s, as well as its precursor project, CTAG2, said genomics sequencing could play a critical role in developing more robust crops.

“One of the big challenges in the prairies is having areas with opposite problems,” said Goldade. “In some places like last year, we had prolonged drought and heat which really hit farmers hard. But some years you might have much more rain, but then you’ll see crops hit hard by diseases like Fusarium head blight.

Fusarium head blight, which is sometimes referred to as scab, is a fungal disease often seen in fields during periods of high moisture, shriveling, and eventually destroying healthy wheat heads. Wheat producers have suffered many billions of dollars in losses because of the disease.

“We have prioritized funding breeding programs using cutting-edge breeding technology like genotypic tools such as Next-generation sequencing, gene-editing, digital imaging, and bioinformatics,” said Goldade. “From Sask Wheat’s perspective, we need to keep researching and producing varieties with traits such as high disease and environmental stress resistance and good pest tolerance. The ultimate aim is to produce big yields and meet the demands for quality by our export markets.”

Established in 2013, the Saskatchewan Wheat Development Commission operates as an agency advocating for producers in the prairie region and supporting research areas, including genomics.

“We’re excited about the 4DWheat project and how it’s using cutting-edge science to develop previously unexploited genetic diversity,” said Goldade. “We’re optimistic this will increase yields and provide critical new sources of resistance to diseases that cause significant loss.

“At the end of the day, traits that improve yield and maintain yield are king.”

While the work of genomic scientists like Pozniak has made great strides, he cautions that genomics should be viewed as an “arrow in the quiver” rather than the ultimate solution to the food challenge.

“I don’t want to create the impression that genomics alone will fix these problems. Integration is what’s vital. You can apply genomics to crop improvement, but plant breeding and integration with agronomic solutions are key to what farmers are actually doing in the field.

“So it’s really that integrated approach to crop improvement that will help us reach targets to improve yield for a growing world.”

Even with looming questions about wheat yields, and the future of food supply, Pozniak remains upbeat about the short and long-term challenges that face food producers in Canada and beyond.

“There’s no doubt the current geopolitical situation in Europe is impacting. About 30 to 40% of global production comes from there, and the drought that we had last year in Western Canada it’s had a significant impact on supply.

“But, I tend to be a glass half full person. People are very resilient, and when we get into these tough situations, this is when the human spirit shines the most. That’s why it’s so important that we continue to invest in science and technology because it helps deliver solutions that will ultimately buffer geopolitical crises and environmental impacts.”