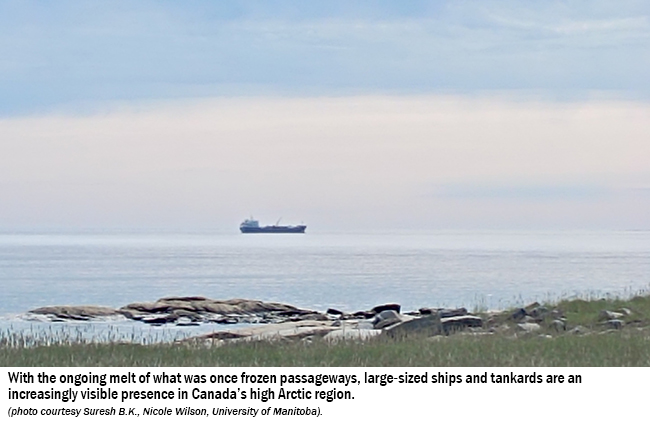 The world is warming, and the Canadian Arctic is (literally) melting. Northern passages through seaways once ice-bound and nearly unpassable are opening to ship traffic. Increasing traffic means a higher risk for accidents like oil and fuel spills. Now researchers from the University of Manitoba are experimenting with portable genome sequencing tools and working with Arctic indigenous communities to help meet the challenge of a changing Arctic environment.

It was 119 years ago when Norwegian explorer Roald Amundsen left port and set sail towards Canada’s High Arctic region. Amundsen had one goal: finding a passage that would wind his ship through treacherous waters, taking his crew from the Atlantic to the Pacific Ocean. It was a journey that had been tried countless times by some of the most famous explorers in human history. In 1498, John Cabot set sail with five ships carrying a 200-person crew. He was never seen again.

Other European explorers like Jacques Cartier and Henry Hudson made attempts and, like Cabot, failed miserably. But in 1903, Amundsen entered Baffin Bay just west of Greenland. Three years later, his ship finally found its way to Nome, Alaska, becoming the first in recorded history to traverse the Northwest Passage fully.

Since Amundsen’s milestone passage, much has changed about the Arctic landscape and the waters surrounding it. A warming planet has caused a slow but sustained sea ice melt through the various channels that guide ships through Canada’s far north. Once home to 300-foot-tall icebergs, which frequently stopped and trapped cargo ships for months on end, in the summer of 2007, climatologists declared the Northwest Passage ice-free.

To gain a sense of the impacts felt by climate change, there may be no better place on earth than Canada’s Arctic region. A vast expanse of primarily uninhabited territory, Canada’s most northern regions cover more than 2.6 million square kilometers, about 40% of the world’s second-largest nation by land.

Much of the Arctic landmass is tundra, where the ground is permanently frozen at about 3 feet depth. The landscape is dotted with geographical features like forests, fields, and lakes in the southern Arctic region. To the very far north, steep valleys containing glaciers and ice fields dominate the landscape. Its coastlines, more than 162,000 kilometers in length, are rugged, inaccessible, and, until recently, surrounded by oceans frozen much of the year.

Within the Arctic, anthropogenic global warming has resulted in a continual decrease in sea-ice extent, thickness, and changes in ice type. In Hudson Bay, ice normally starts building up across Hudson Bay in November, but the area has remained almost entirely ice-free in the face of temperatures 6°C above average. In the north-western Hudson Bay – where GENICE II research is focused – ice extent is at a record low, said Dr. Gary Stern from the Centre of Earth Observation Science at the University of Manitoba. “Shipping and oil exploration are, therefore, becoming increasingly more feasible, thereby increasing the potential of crude oil or fuel being spilled into the marine environment.

The disappearance of sea ice in Canada’s high arctic has made traversing from western Europe to eastern Asia far more efficient. It’s also resulted in a dramatic increase in shipping traffic. According to a 2021 study by the Protection of Arctic Marine Environment working group, traffic increased 44% between 2013 and 2019, with some tankers carrying up to 18,000 tonnes of oil.

“Canada is woefully unprepared for oil spills, especially in the Arctic,” said Stern. “It’s a whole different ballgame than what you’d deal with in the south where you’re closer to land where you can get out oil skimmers and other forms of remediation.”

Stern, along with Dr. Eric Collins from the University of Manitoba, lead GENICE II, a Genome Prairie and Genome Canada-funded project to detect and monitor oil or fuel spills. GENICE II will leverage genome-based DNA sequencing technologies to monitor microbes that act as natural hydrocarbon degraders that break down and disperse fuel contaminants.

The sequencing technologies are portable handheld devices called MinION Oxford Nanopores. The real-time devices will allow a new way of seeing marine microbial communities and how they change seasonally as a result of light, temperature, and nutrient availability – factors that constrain the efficacy of oil biodegradation. Our ultimate goal will be to use nanopore sequencing technology to enable the iterative, real-time, affordable, on-site monitoring necessary to evaluate and monitor natural microbial attenuation and its value in an effective response should a spill occur.”

The disappearance of ice also raises the possibilities for the expansion of oil exploration and drilling activities, where an estimated 8.4 billion barrels of oil lay beneath the ocean beds and land tundra. Although there is an oil drilling moratorium in Canada’s Arctic, Stern notes increasing oil prices increase the economic viability for producers and governments to eventually open the region for exploration.

The potential for Arctic spills and the possibility of future oil exploration is an issue of great concern to indigenous populations that live in communities that dot the region. In 2021, a study by the University of Manitoba found an oil spill event would be significantly impactful on communities and Indigenous populations. Published in the journal Risk Analysis, its lead author Mawuli Afenyo from the U of M, noted that “Our study showed that an oil spill in this region has serious social impacts — affecting the family dynamics, hunting traditions, and culture of vulnerable indigenous communities.”

“We talked to many far northern communities like Baker Lake, Rankin Inlet, Arviat and Chesterfield Inlet, they’ll tell you the amount of ship traffic in their region has increased dramatically,” said Stern. “The increase of ship traffic is the result of increasing regional mining activities and comes with a number of issues, the biggest one being the potential for oil spills. 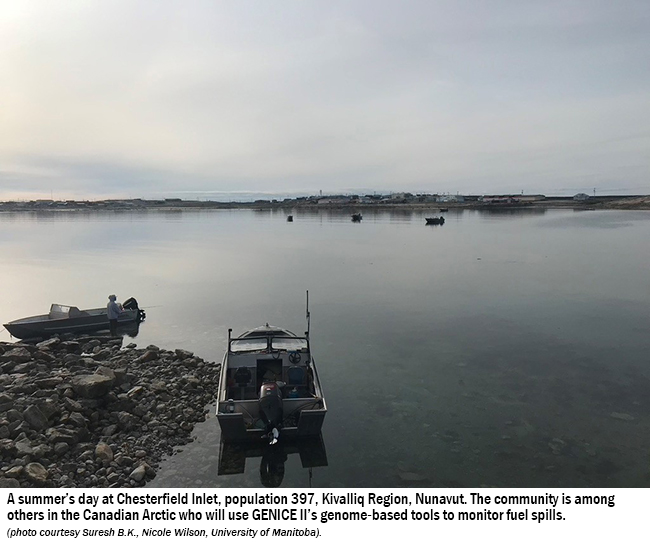 Since its launch, GENICE II has worked cooperatively and collaboratively with many indigenous communities, including Inuit populations in the northwestern Kivalliq region. Maintaining a strong relationship between the GENICE II project team and indigenous communities is essential to the project’s ultimate success. As Chesterfield Inlet mayor Barnie Aggark said in June 2021 to UM Today News, the Kivalliq region “… is a rich and sensitive ecosystem that is a highly important area to our community and any spills would flow down the inlet and through our hunting and fishing areas, damaging the environment and our marine mammals that are already impacted by the shipping.”

GENICE II will also aim to provide training to local Arctic communities to monitor identified contaminated areas beyond the length of the project itself. The hope, says Stern, is to distribute the portable DNA sequencing devices to residents who would use them to further collect more data and better understand how microbes respond to spills.

“To do field work, we use ships and traveled up and down the coastline of Hudson Bay,” said Stern. “But it’s very limiting because using ships is very expensive, and you can really only do field work during warmer months.

“By having indigenous people and communities involved and trained to use the portable sequencers, we can broaden the scope where monitoring could be done year-round. It also means we could monitor how microbes respond during the cold months,” said Stern.

Beyond experimenting with the sequencers and understanding how the High Arctic environment responds to human-made contamination, Stern says one of the most rewarding part of the GENICE II project has been his work with indigenous people.

“We’re always meeting and working with communities to gain their perspective. Working with and hearing the traditional knowledge they provide us; I find it extremely interesting and rewarding.

“I think people underestimate the talent of the indigenous populations in the Arctic and how much they want to be directly involved in the research. It’s been incredibly rewarding.”