Home » Quality above Quantity: How Cutting-Edge Lentil Genomics is Poised to Change the Face (and Profitability) of Canadian Agriculture

Quality above Quantity: How Cutting-Edge Lentil Genomics is Poised to Change the Face (and Profitability) of Canadian Agriculture 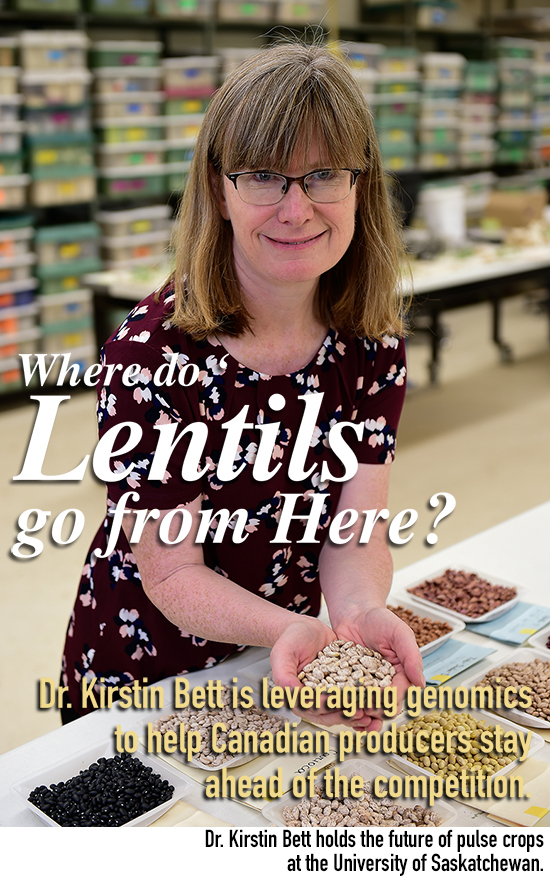 Intense genomic research at the University of Saskatchewan Crop Production Centre is helping to keep Canadian pulse producers ahead of intense overseas competition.

For Kirstin Bett, a professor, and researcher at the Crop Development Centre at the University of Saskatchewan, explaining one of the biggest goals of her time spent researching how we grow lentils is best accomplished by comparing it to how we buy an automobile: “Think of it this way. When we decide to buy a car, we don’t go to a dealership and point at the first red car we see and buy it. We have specifics of what we want in the car. Shape, size, model.”

“It’s the same for lentils.”

Bett’s nearly two-decade-long time researching the lentil genome is now paying dividends. The future of food production may not be that different from buying a customized red car.

“The sky really is the limit.”

About the size of confetti, the lentil seed comes in a variety of colours ranging from olive green to pumpkin orange, deep earth red to midnight black. For the average Canadian consumer, lentils are readily found on the shelves of the international section of local supermarkets or at the neighborhood health food store.

Bett, who earned her undergraduate and master’s degrees at the University of Guelph, headed west and completed her doctorate at the University of Saskatchewan in 2001. “My original plan, I was only going to stay in Saskatoon for three years, but then I found out that a lot of their research was the same thing I was interested in, and I still haven’t left!”

Since her unplanned decision to stay in Saskatchewan, Bett has spent much of her time researching pulse crop genomics and is, today, considered a foremost expert (she was recently featured in a splashy profile of leading Canadian researchers in The Globe and Mail, the country’s most popular daily newspaper). In 2020, she received the Dean’s Award for Research Excellence.

It’s hard to fault Bett for her keen interest in this seemingly modest seed, which has emerged as a remarkable agricultural success story. 50 years ago, it would have been almost impossible to find a single lentil farmer in Canada. Fast forward to the present, and the nation grows more than 3 million tonnes of lentils annually, more than half of the world’s total supply. Nearly all (about 95%) of Canada’s lentil crops, which produced almost $3 billion in export revenue in 2021, are grown in Saskatchewan. To put that into perspective, if every living Canadian got a share of Saskatchewan’s crop, they would have a 174-pound box of lentils dropped on their doorstep.

“Canadian farmers have gone from 0 to 100 in about 25 years,” said Bett. However, her reference to the industry’s success is tempered by the realism that the days of Canadian dominance as a volume supplier may be ending.

“Kazakhstan has come online and is now producing the same varieties grown in Canada, and they have a huge exporting advantage in that they are way closer to India and north and south Asia, which are the biggest lentil consumers.” Competitors like Kazakhstan, India, Turkey, and Nepal have steadily increased their production (US output has also increased significantly in the past decade). In contrast, Canada’s production levels started to flatten out.

Bett argues that future opportunities for Canadian producers may not be in producing just higher yields but in growing specialized types attractive to exporters and, eventually, to consumers.

“Countries like Kazakhstan are poised to undercut Canada’s exporters, so we have to get out ahead of that by having better genetics. One way is to diversify what we’re producing to go after the premium markets.”

Great opportunity, emphasizes Bett, is at hand for markets with increasing levels of wealth. “There is a rising middle and upper class in places like India. These are consumers who demand high quality. They’re very picky. They know the product way better than an average Canadian,” said Bett.

“Think about something like fruit. It used to be you’d go to the supermarket and buy, say, some apples. You basically had one choice. Today if you go to the market, there are wide varieties of apples. You buy Honey Crisp apples; you pay more for them. If consumers are willing to pay a premium for apples, why not lentils?

“We’re seeing more and more consumers spending a little bit extra on something premium. They’re interested in buying black-seeded ‘beluga’ lentils because they make a really great dish, or they’ll spend a little more to get something that looks nice.”

Beluga lentils which bear an uncanny resemblance to caviar, currently cost around $12 a kilo at grocery stores. Less “fancy” lentils commonly found in bulk are around half the price of belugas.

Maintaining Canada’s competitive dominance by transforming itself from a “volume” to a “value” supplier is at the heart of the EVOLVES project, which Bett has led since 2019.

Supported by Genome Prairie, EVOLVES (which stands for Enhancing the Valueof Lentil Variation for Ecosystem Survival) is also funded by Genome Canada, Saskatchewan Pulse Growers, Western Grains Research Foundation, and Agriculture and Agri-Food Canada (among others). 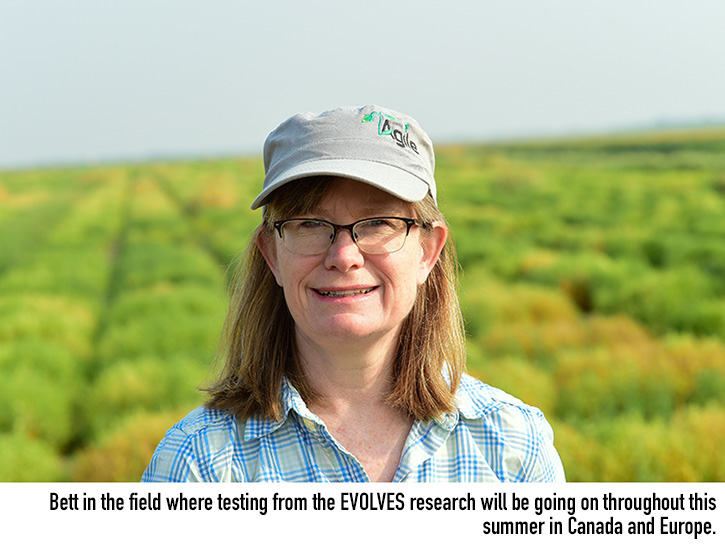 The EVOLVES laboratory work has mainly been happening at the Crop Development Centre located on the main campus of the University of Saskatchewan. A significant part of the project is improving the genetic variability, phenotyping, and gene sequencing of both cultivated and wild lentils. EVOLVES also takes an ‘omics (combining genomics and phenomics) approach so traits highly valued by exporters can be “zeroed in on” to produce specific varieties. This could result in crops with a specific colour, size, taste, or nutritional value.

“We’re developing tools to give plant breeders the ability to efficiently change traits. So, if it’s got, say, a green seed coat and we want the French green speckled seed coat, we would have a genomic marker that would allow you to do that quickly.”

Field trials from the EVOLVES project will begin this summer in earnest, said Bett. “We’ll be growing lentil trials in Saskatchewan and southern Italy. We’ll be examining outputs and quantifying crop colours and other traits.”

Organizations representing producers like the Saskatchewan Pulse Growers view the work led by Bett and the Crop Development Centre as an essential component to future prosperity.

“We have a long history of funding Dr. Bett’s work through the pulse breeding program. We’ve been a long-time supporter of projects that are building tools for producers,” said Allison Fletcher, Research Project Manager at SPG. In years past, SPG had also funded another Bett-led genomic research project, AGILE, which also looked at improving the lentil genome.

“EVOLVES was the logical progression of a long relationship,” said Fletcher. “We found clear evidence the genetic pool and germplasm base in lentils was really narrow, so there wasn’t a lot of room left for continued genetic improvement in desired traits.”

“One of the traits we’re looking at is making lentil seeds smaller, which means faster cooking time, which means less energy needed to prepare meals, which means lower C02 emissions.

“If you’re making beans, you’ll probably need them to sit on a stove for up to an hour. But you can make lentils in less time it takes to make rice. It saves a lot of energy, and that’s another reason why world demand is on an upward trajectory.”

But are the increased demands being seen among Canadian consumers? While a mainstay staple in places like India, far southeast Asia, and the Middle East, lentils have struggled to establish themselves beyond the fringe of a typical Canadian diet.

“We’ve always been a meat and potatoes country,” shrugged Bett. “The settlers who came to this country in the 1800s and 1900s were mainly Europeans who didn’t bring a diet high in pulse foods or vegetables.”

Canadian attitudes, however, may be changing. The seed is gaining increased interest among vegetarian and vegan consumers while also being used to supplement other staples, including flour.

“I think there’s been a change happening among consumers. Plant-based diets are becoming more popular; the use of the different components of the lentil seed as ingredients in food products is likely going to increase Canadian consumption,” said Fletcher.

Immigration to Canada may also have longer-term impacts on consumption, said Bett. “Many people who emigrate from countries where lentils are a staple food bring their culture and diet. That’s why you’re seeing more and more options in Canadian supermarkets, and you can buy more than one kind of lentil.”

As food prices continue to rise in stores and supply shortages loom for staple crops like wheat, lentils may play an increasingly important role in diets in Canada and beyond, said Bett.

“Lentils are probably the cheapest sources of protein and easiest to cook. It works well with so many other ingredients like rice and potatoes, or spices like curry.

“We need to view it not just as a low-cost protein. You’re seeing lentils more and more in upscale restaurants, especially as menus cater more to vegetarian and vegan options. Even steakhouses are including them in their menus.”

With attitude changes, said Bett, maybe, lentils might be like a shiny new red car for consumers.