Home » How SARS-COV-2 Transformed Capacity in the Prairies

How SARS-COV-2 Transformed Capacity in the Prairies

June 23, 2022
The World Health Organization declared a pandemic. SARS-CoV-2 was spreading through the population, and the systems in place to understand the virus were facing a seemingly insurmountable challenge. Within weeks, the CanCOGeN project turned Saskatchewan and Manitoba public health laboratories into world-class centres for infectious disease genomics. 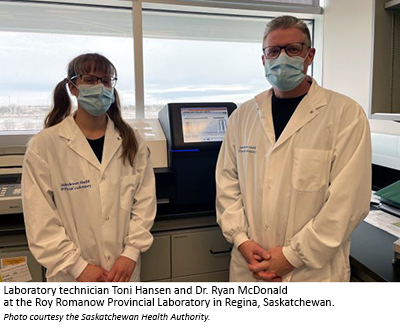 It’s been more than two years since Genome Prairie and Genome Canada unveiled a collaborative effort to leverage the power of genomics to fight a global pandemic. For almost 100 years, the world had mostly avoided the outbreak of a large-scale infectious disease. In Canada, systems designed to quickly analyze and respond to a highly contagious pathogen were still to be fully developed.

What a difference those two years made.

With the world only now moving past the worst effects of the 2+year-long epic journey of the COVID-19 pandemic, the capacity to respond to highly contagious pathogens is markedly higher in Canada’s prairie region. Unveiled in April of 2020 by Prime Minister Justin Trudeau, the genome sequencing project called CanCOGeN was made up of a vast consortium of federal, provincial, and regional public health authorities, academia, and industry. At its launch, CanCOGeN’s primary focus was on genome sequencing of the SARS-COV-2 virus to better understand the virus and offer Canadians information to make decisions on preparing and responding to an ever-changing and dynamic pandemic landscape.

When the SARS-CoV-2 virus was declared a pandemic in February 2020, international borders began to close, dramatically changing how people lived their day-to-day lives. Scientists worldwide scrambled to understand the virus, how it spread, and how it made tens of thousands (and soon millions) of people sick. In Canada, many provincial governments declared public health emergencies which caused many offices, shops, and public gathering places to shut their doors indefinitely.

In Saskatchewan and Manitoba, public health officials sought information about how SARS-CoV-2 spread among cities and towns. Was the virus widespread? Was it contained? Who was getting sick? How was it being transmitted? There were many tough questions and policy decisions to be made with little time to spare and very little information. The system that was in place wasn’t highly optimized for efficiency.

“When COVID-19 emerged as a serious public health issue, we didn’t have a lot of capacity for sequence-based typing and surveillance of pathogens at our laboratory. We were mainly participating in the surveillance of enteric bacteria responsible for outbreaks of food-borne illnesses,” said Dr. Ryan McDonald, who is a CanCOGeN project lead at the Roy Romanow Provincial Laboratory (RRPL) in Regina, Saskatchewan. 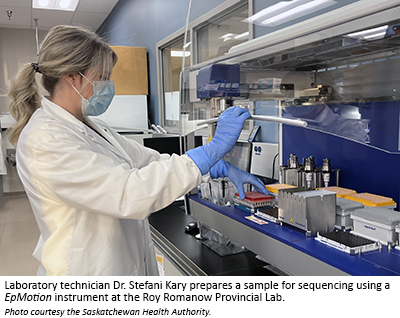 Since its beginning, CanCOGeN has raised the ability of laboratories in the prairies to respond to outbreaks of infectious diseases. It’s also heightened the quality of information that serves as the lifeblood for public health officials in making critical decisions affecting residents.

“One thing CanCOGeN has changed is the turnaround time in getting results. Before, we didn’t have as much capacity for our laboratory scientists to generate and analyze sequencing data,” said McDonald.

Sequencing and bioinformatics analysis – the process by which critical information is revealed based on a pathogen’s genomic material – required significant resources beyond lab scientists. Crucial infrastructure such as equipment for automated sample processing, sequencing instruments, and powerful computers to analyze data was needed quickly.

“A fast turnaround was vital for public health action both in the provinces and around the world,” said McDonald. “We were racing to understand how the virus was evolving and trying to stay in front of it as best we could,” said McDonald.

“Very early in the pandemic, we leaned heavily on the National Microbiology Laboratory (NML) in Winnipeg to perform our sequencing and bioinformatics analysis. At that time, we would send them our clinical specimens without any contextual information about the case itself. We’d get results back and communicate those to stakeholders and medical health offices.”

Part of the initial challenge for the Romanow Lab was the need for sequencing equipment to study the SARS-CoV-2 virus and the computing power to analyze the genomic data produced. The CanCOGeN project changed the situation almost overnight. With funding support, the RRPL suddenly found themselves in the enviable position of having the means to get the gear.

“In very short order, the project allowed us to put together what was once a wish-on-a-hope-on-a-star list for laboratory equipment and infrastructure,” said Dr. Amanda Lang, who works as a clinical microbiologist at Romanow Lab.

“Mainly because of CanCOGeN’s funding support, we could procure laboratory equipment that we previously could only dream of having. Even the bioinformatics side, we put things in place we didn’t have like the computing power and infrastructure needed for large-scale data like that produced by genome sequencing,” said McDonald.

But in preparing to ramp up the laboratory infrastructure, researchers suddenly discovered a huge problem. At the time of the outbreak, the world was desperately short of computer graphics cards, an essential component for building the supercomputers needed for genome sequencing analysis.

“Global supply chains presented a huge challenge for establishing our SARS-CoV-2 surveillance program. Almost all the world’s graphic cards were being snapped up by those involved in mining cryptocurrencies,” said Dr. Keith MacKenzie, an Associate Clinical Scientist at the RRPL.

“It was next to impossible to find this crucial computer part. I remember browsing the internet at midnight one evening and through luck, found a computer with the right graphics card. I clicked the order button immediately.

“It probably would have been gone within hours if I hadn’t acted on the moment.”

“Keith and I were actually texting each other in the middle of the night about this computer, and we each decided to purchase one in the hopes that one would actually ship,” said Lang.

Keith’s order went through. RRPL’s ability to establish its essential surveillance of SARS-CoV-2 variants, at least on its bioinformatics side, could proceed. 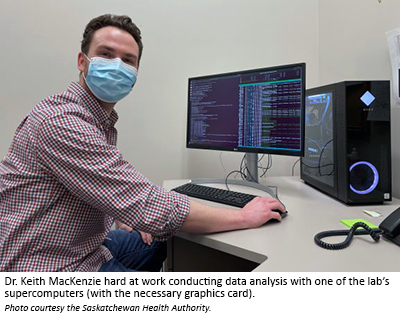 Now with the physical infrastructure in place and lab scientists geared to put their knowledge to work, RRPL quickly produced significant data that became invaluable to health officials in the province and eventually played a crucial role in building a national sequencing repository.

“With Variants of Concern emerging, the pressure was on to get genome sequencing up and running so we could better understand the dynamics of the pandemic in Saskatchewan. We started our in-house sequencing program in February 2021, just as the Alpha variant started to take off. Our early experience with Alpha prepared us for the introduction of other variants like Beta and then Delta in the fall of that year. We were acutely involved with genomic sequencing through all the major Variants of Concern.”

“CanCOGeN dramatically changed how we responded to COVID-19 and what we can do for infectious disease surveillance in Saskatchewan,” said MacKenzie. “Before CanCOGeN, we had fairly minimal amounts of sequencing and bioinformatics in-house capacity. We sequenced about 20 specimens per week and mainly targeted specific outbreaks of infection or cases of concern.” 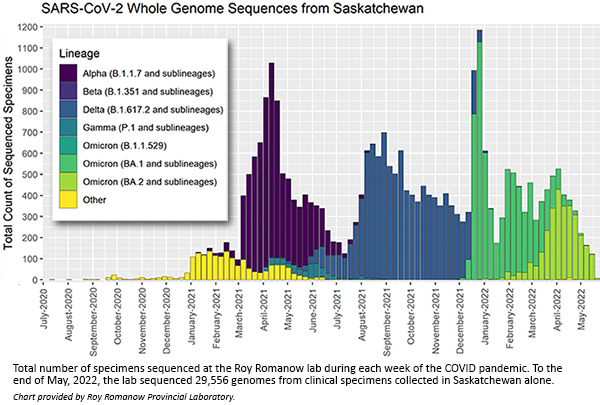 A vital part of the project is how the information is being shared among other CanCOGeN-supported laboratories in Canada. Sequencing data was uploaded to a central national database for further analysis. The Roy Romanow Laboratory has contributed nearly 30,000 COVID sequences to the national database through May 2022. The national database is also shared with publicly accessible repositories such as GISAID, the world’s primary SARS-COV-2 genome sequencing database.

“Plugging into the national and international databases was very time-consuming,” said McDonald. “We had to get a Memorandum of Understanding in place to share contextual data about clinical cases.

“Getting from near zero to a weekly functioning bench where we’re producing data and contributing timely reports about the landscape of SARS-CoV-2 in Saskatchewan was huge,” said McDonald.

Getting “plugged in” to national and international resources added to building capacity in the prairies. It also took some pressure off the National Microbiology Laboratory, which had shouldered sequencing and bioinformatics tasks.

“Before CanCOGeN, our understanding of COVID-19 and how SARS-CoV-2 was changing during the pandemic heavily depended on bigger provinces that had more support outside of CanCOGeN to do the high-throughput surveillance and fine resolution analyses needed to predict what was coming next with the virus,” said MacKenzie.

“Flash forward to now, both Saskatchewan and Manitoba’s provincial public health labs can better represent what’s happening in the Canadian prairies and contribute as a region to the national picture of infectious disease surveillance. Without CanCOGeN, we wouldn’t have been able to accomplish what we have during this pandemic,” said MacKenzie.

“Our Medical Health Officers, epidemiologists, and lab leadership were all very engaged in tracking variants,” said Lang. “Every time we heard a new variant was coming and it had early indications of being more infectious or severe, we would get ready to respond. Our work in the lab focused on producing timely surveillance data for our Medical Health Officers and public health officials that told the ‘prairies’ picture. We could say hey, we’ve found this variant in this area through whole genome sequencing, and we think it’s moving in a certain direction.

“It was very helpful to our health officials knowing how COVID-19 was affecting the prairies compared to the rest of the world.”

With COVID-19 now largely considered less of a public health risk compared to the first 24 months of the pandemic, the future of sequencing and surveillance work at both provincial public health labs will focus on preparing for future threats.

“The most immediate goal we’re already working on in Saskatchewan is influenza sequencing,” Lang said.

“Sequencing influenza and putting it into public repositories, just as we have with SARS-CoV-2, will help the WHO [World Health Organization] influenza network to develop the annual flu vaccine. We currently rely on the National Microbiology Laboratory to perform this crucial work.”

“We’re also sequencing important pathogen outbreaks like Salmonella and E. coli. Performing the sequencing at our provincial labs, and coordinating with experts at the National Microbiology Laboratory, means that we can quickly determine who is affected by an outbreak. We can use sequencing to determine the source – is the outbreak caused by these mangos or these bean sprouts? We’ll be able to quickly track down potential food reservoirs that may be behind what’s making people sick.”

As for the next contagious pathogen? McDonald said the prairies are better-prepared thanks to the groundwork performed through CanCOGeN.

“I think from the prairies’ perspective, we’re in a much better place now than we were two years ago. If we need to port our experience to another organism in short order, we are poised to do that very quickly. We have staff trained, we’ve got the know-how, and we have resources now that we didn’t before.”

“The people, the expertise, and the equipment are in place. If that can be sustained, we’ll be positioned for success for whatever the future holds.”